Atlantic Naturals now offers an organic sea moss powder that combines the superfoods like Maca, Beet Root, and Ashwagandha with the world’s most nutrient-rich algae giving you a health elixir that is as delicious as it is good for you.

Because the powder is so tasty and easy-to-mix, you can add it to water, your favorite milk substitute, or even a homemade smoothie.

The delicious taste is not the only reason you will want to stir in Atlantic Naturals Sea Moss Superfood Powder. The health benefits will definitely be your number one reason.

If you’ve been following the health food world, then you already know how popular sea moss is! The liquid-form is commonly used in broths and soups in Ireland as well as in creamy beverages in the Caribbean.

But for many, soaking the sea moss for hours, then turning it into to a gel by blending and boiling it is too much work — hence, our easy to use powder mix.

But what’s in it?

Chondrus crispus, Sea Moss or Irish moss isn’t actually a moss. It is technically an algae or a seaweed. Found on the coast of the Atlantic Ocean — specifically in North America, Britain, and Europe — Irish moss is a branching red seaweed that is commonly used in food. However, it does play a role in other industries as well.

The thing that makes Irish moss so useful is the jelly-like substance called carrageenan. Vegans may be familiar with carrageenan as it is often used as a gelatin substitute. However, it can also be a general emulsifier found in things such as infant formula or ice cream. It is also a great source of omega-3 fatty acids!

Irish moss offers plenty of health benefits, making it a popular addition to many people’s diets. These benefits include:

An important herb in Ayurveda, an alternative Indian medicinal practice that focuses on natural healing,  Ashwagandha has been used in medicines since ancient times. For thousands of years, people have turned to Ashwagandha root to help boost energy levels and concentration while decreasing stress.

The word itself is Sanskrit and means “smell of the horse”, a phrase that refers the smell of the root as well as its strength-building properties. The botanical name for Ashwagandha is Withania somnifera, but it is still yet known by several other names including winter cherry and Indian ginseng.

The plant itself looks like a small shrub, and it blooms yellow flowers. You will find Ashwaganha native to India and North Africa. There are many uses for this important herb including:

Beta vulgaris or beetroot is a vegetable that is known by several names including table beet, garden beet, or red beet. This root veggie is packed with fiber, vitamin B9, manganese, iron, vitamin C, and potassium.

In addition, due to having a high amount of inorganic nitrates, beet root has been known to be great for cardiovascular health.

There are plenty of ways that you can consume beet roots including eating them raw, but most people cook or pickle them. You can also eat the leaves of the vegetable as well!

Adding beet root to your diet may:

Known by its scientific name Lepidium meyenii, Maca Root or Peruvian ginseng has been a trusted dietary supplement for decades, both for its flavor and its health benefits.

Native to the Andes mountains in central Peru, maca root seems to thrive in inhospitable conditions and high altitudes. A cruciferous vegetable, maca root is actually closely related to kale, broccoli, cabbage, and cauliflower. Most people describe it as having a nutty or earthy flavor.

Ranging in color from white to black, the edible part of the maca plant is the root which grows underground. Most people dry it into a powder, but it can also be made into a liquid extract or put into capsules.

Due to its high nutritional value, people add maca root to their smoothies or oatmeal. It is a great source of carbs with a high-fiber content. Plus, it is full of vitamin C, iron, and copper.

Who Should and Shouldn’t Use Sea Moss Superfood Powder

There are plenty of reasons why you may want to add Sea Moss Superfood Powder to your diet.

People wishing to lose weight will love the fact that Sea Moss Superfood Powder has a high fiber content. This means they will stay full longer, leading to weight loss!

Plus, this healthy elixir is packed full of essential minerals and vitamins the body needs to function. The vitamin B content in the powder will help support mental focus and boost energy levels. And the additional minerals are great for vegans and vegetarians.

But as they always say, there is such thing as too much of a good thing. There are some reasons why Sea Moss Superfood Powder may not be something you want to add to your diet.

For instance, sea moss can have anticoagulant properties, especially in higher doses. This means that it can act as a natural blood thinner, but if you are already taking medication that thins your blood, sea moss powder may not be for you. Anyone taking anticoagulant medication should speak to their doctor before taking Sea Moss Superfood Powder.

People with stomach issues such as ulcers, internal bleeding, or IBS should consult with a physician before adding Sea moss Superfood Powder to their diet.

Those who are pregnant or nursing should also speak with a doctor before trying Sea Moss Superfood Powder.

How To Use Your Sea Moss Superfood Powder

Sea Moss Superfood Powder is extremely easy to use. Simply mix one scoop with 8-10 ounces of your favorite liquid. Then stir it until everything is smooth.

Want something a little more exciting? Try one of these smoothie recipes!

The fruitiness of this smoothie complements the vanilla flavor in the Sea Moss Superfood Powder creating a tasty blend any time of day!

Get your day going with this fresh-flavored peach smoothie. It works best with fresh peaches, so you will want to make sure they are in season in your neck of the woods.

If you have trouble eating all of your recommended leafy greens, why not try drinking them? This smoothie is a great way to be sure you “eat all of your vegetables.”

Just like grandma used to make, this apple pie smoothie will taste like dessert a la mode when you add the delicious vanilla-flavored Sea Moss Superfood Powder.

Know you need the spinach, but can’t drink a green drink? This smoothie will trick you into getting those greens with its delicious taste!

Eating healthy doesn’t have to be a huge hassle. You can get all the nutrients you need with just a few tweaks to your diet, like adding Sea Moss Superfood Powder to your repertoire.

By making small changes to your daily habits, you can lead a healthy lifestyle that is sustainable and enjoyable.

Just wondering if after having Bariatric surgery would my digestive system absorb everything? I had a rough n y surgery where they removed part of my intestine leading from my stomach.

Let customers speak for us

This product is the start of a new life for me. I actually thought I was sick. I felt horrible. But all my test were negative. Colonoscopy, cat-scans, everything. These pills has me feeling so good. I will be ordering more soon. Thanks for checking in 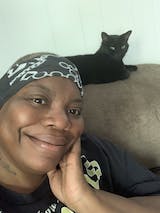 I was diagnosed with PCOS in 2008 and for years have struggled with weight gain/fluctuation, mood swings, hot flashes, constantly feeling weak & lethargic. I hate meds so typically I look for holistic remedies. Over the last year my symptoms worsened & I became frustrated not finding anything to aid with my symptoms. A few friends recommended sea moss, I must say I was a bit hesitant due to my shellfish allergy, I was afraid I couldn’t use sea moss because of the iodine. Upon further research I found that despite my allergy it didn’t necessarily mean I had an iodine allergy so I gave it a shot. I am now on day 9 of these capsules and am extremely pleased. Aside from it completely cleansing my system, I have felt more energy lately than I have in years, my mood has been stabilized, it’s reduced my bloating and literally has allowed me a much better sleep (i suffer from insomnia). I can’t really speak on the hot flashes but as far as overall feeling I can honestly say I feel the difference and I absolutely love it. I would recommend to anyone with hormonal or thyroid disorders for sure.

I recently got diagnosed with hypothyroidism, so I decided to give this a shot. I was skeptical at first, but I have to tell you guys, I am truly impressed! My appetite is already back to normal and I’ve been feeling a lot more energetic. I’ll continue to use this and keep you guys updated on my progress 😊 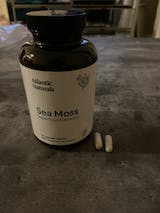 I’m so glad someone that I have confidence in suggested this brand to me. At first, I was comparing the gel-based sea moss that several vendors are offering. I was hesitant, so this suggestion came just in time. Yes, I can feel a difference. Sometimes it’s not what you’re putting in your body that’s causing adverse reactions, it’s what a body might not have. And with 90+ minerals, I’m certain it was the latter for me. Thank you for this!

I suffer from really bad allergies and this really helped with my sinus inflammation!